In recent years, followed by a sharp rise in demand for nose surgery, the number of male applicants for surgery has increased, so special attention is paid to men’s rhinoplasty. There are subtle differences between the Nose Surgery in men and women; in men much removal of the back area of the nose and thus creating a hump towards inside must be avoided, rather the back of the nose or dorsum must be flat. The facade of flat nose dorsum is more beautiful in men. 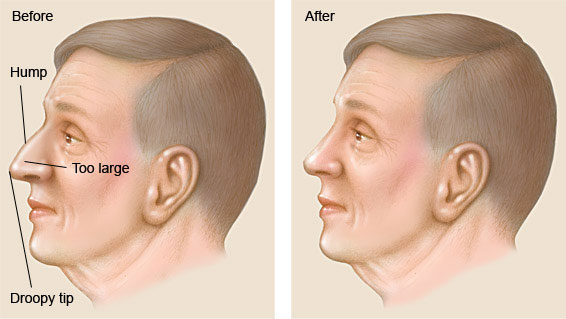 The angle between cullomella and lip in men is preferred to be about 90 to 100 degrees; this is in contrast to women for whom more upward nose has the priority. In most men, the skin is too thick and it makes the disinflation period longer than women, and in many men the need for frequent injections of triamcinolone is to reduce inflammation.

Keeping breathe according to excessive physical activity of men is very essential.

Because of more nose fractures and frequent nose blows in men there is more chance of crooked nose in them.

Thus emphasizing on more accurate and frequent osteotomy causes moving nose bone and the flatness of nose. Today, for rhinoplasty many patients ask for fantastic and doll nose like nose, I emphasize that in men it can lead to deformity of the nose and the fantastic nose should be avoided as much as possible in men.

Another point that should be examined in men is the emotional and personal issues of the patients who are requesting rhinoplasty. Personality disorders in men applicants is greater than women, therefore sometimes it is good to consult a psychiatrist before doing cosmetic surgery. I must emphasize that men who are seeking Nose Cosmetic Surgery or rhinoplasty should be careful about issues such as obsession and depression and if any of these issues exist they should avoid surgery.

In summary, rhinoplasty in men requires special attention and in terms of technique and psychology it needs more subtlety as compared to women.